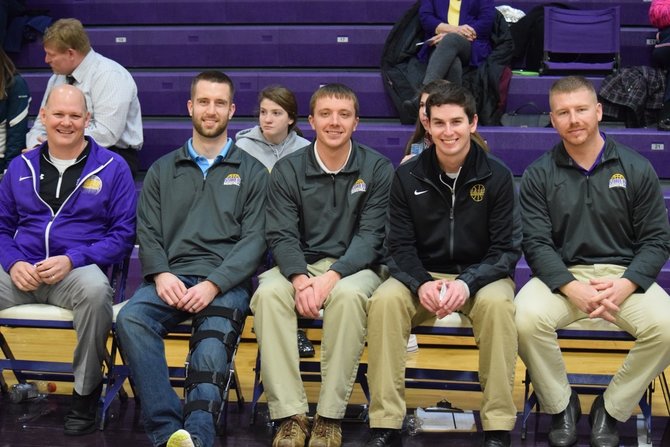 Coach Frick, Coach Cram, Coach Burke, Coach Gallagher, Coach LaKose
Head Coach
Jeff Frick
Coach Frick is entering his 10th year as the Sabers head basketball coach in 2017-2018 and his 18th year as a varsity head coach. Coach Frick was born and raised in Dubuque, Iowa where he attended Hempstead High School.  He earned his teaching degree from Loras College and his masters degree from the University of Saint Mary in Kansas. Coach Frick is married to his wife Lori who works for the Iowa Department of Human Services as a Service Area Manager.  They have 2 children, BJ and Kaity.  Before coming to the Sabers, he was the head basketball coach at Western Dubuque High School from 1999-2007.  During the 2001 season Coach Frick's team was crowned State Champions in 3A with a 27-0 record. During the 2014 season the Sabers were 3A State Runner Ups and finished the season with a 23-4 record.


Assistant Varsity Coach
Jake Cram
Coach Cram is his 4th year with Saber Basketball, his 3rd with the varsity team after volunteering with the freshman team.  A native of Marion, Iowa, and a former Marion Indian, he earned a bachelor of science from Mt. Mercy University in Cedar Rapids, Iowa in 2011 where he was also a member of the men's basketball team.  After Mt. Mercy, he received his Doctor of Chiropractic degree from Palmer College of Chiropractic in Davenport, Iowa in 2014 and is working as a chiropractor at Hill Chiropractic Office in DeWitt.
Jacob met his wife Alyssa, a Grand Mound native, while at Mt. Mercy. She works as an occupational therapist and is an assistant girls track coach at Central DeWitt.​


Freshmen Coach
Scott Burke
Coach Burke is in his 2nd year as the Saber freshmen coach.  Coach Burke was a graduate from Central DeWitt in 2010.  He attended The University of Northern Iowa where he earned a degree in physical education and was a part of the Intramural basketball Champions.  Coach Burke is currently the PE teacher at Ekstand Elementary and freshmen baseball coach.  He is engaged to Kelli Shimp.


Freshmen Coach
Cody LaKose
Coach LaKose is in his 2nd year as the Saber freshmen coach.  Coach LaKose was a graduate from Cedar Rapids Jefferson in 2003 where he was an all-conference quarterback, and a captain of the football, baseball, and basketball teams.  He attended The University of Northern Iowa where he earned a B.A. in Biology in 2007, and a M.A. in Science Education in 2015.  Coach LaKose is currently an Anatomy & Physiology instructor and Biology teacher at Central DeWitt High School.  He also coaches in the football and baseball programs.
​

8th Grade Coach
Bill Goble
Coach Goble is in his 11th year as a middle school basketball coach here at Central.  Coach Goble was born and raised in Camanche, Iowa and graduated from Camanche High School.  After High school he earned his degree at Mt. St. Clare College and Ashford University.  Coach Goble is a 6th grade math teacher at the Central Intermediate School here in DeWitt.  He is married to his wife Sasha and they have 4 children: Natalie, Luke, Owen, and Nora.


7th Grade Coach
Collin Ellis
Coach Ellis is in his 4th year as the 7th grade boys basketball coach.  He was born and raised in Long Grove, Iowa and graduated from North Scott High School in 2006.  He then earned his teaching degree at the University of Iowa.  Coach Eliis currently teaches 6th grade ELA and social studies at the Central Intermediate School.  He is engaged to Chelsea Fore.  Coach Eliis is also the head boys golf coach here at Central.